I continue to use the words, “All Stars” sparingly, the final four remaining chef’s are simply not the best of the best.  The best have already been eliminated for reasons unknown.  All Stars would have been a really great time for Top Chef producers to try a new elimination system of points or at the very least a second chance for the eliminated chef to return, sort of like Survivor’s Redemption Island.

But here we are with Richard, Mike, Antonia and Tiffany.  I think even these four chef’s are surprised at the final four.  But here they are in what we’ve been told again are the “Finals”.  I would think that “finals” by definition would mean it is the last competition, right?

The Quick Fire Challenge tonight is all about consistency.  This is a concept that Top Chef knows nothing about, but they’ve set the chef’s a task of preparing one hundred dishes in one hour. Two teams of two and the ladies pair up against the men. Their goal is for each plate to be exactly the same.
It seems as though these final chef’s are prompted and prodded to slam each other, do producers attempt to get them to say mean things about their competitors?  I think it is completely unnecessary but we have to listen to it anyway.  Mike can’t believe the ladies chose such a “simple” dish, Antonia tells us that the ladies dish is much harder to plate.  More talking head interviews about how horrible the other team is and we’re left with 196 plates served to guests and four random plates are given to two judges, Padma and Guest Judge Loraine Garcia.  Padma tells us that Ms. Garcia can be seen on NBC’s America’s Next Great Restaurant.

Both teams were applauded for their consistency and quality but the women win the challenge.  Sorry Mikey, you were wrong again, as Mikey dished up nasty comments, the ladies dished up a winning plate.

The Elimination Challenge took place at the Nassau Yacht Club where Padma greeted the final four chefs wearing a skimpy bikini, another completely unnecessary element in the show but I suppose if they’re trying to attract male viewers, that could do it.  Channeling Vicki and Donn from Orange County, the chef’s are to use Conch in their dish, a shellfish that most of the contestants have not worked with before.
Mike tells us that when he learned he was going to the Bahamas he researched the country’s cuisine and found they cook with a lot of Conch, therefore he did some experimenting with it back home.  Smart move Mikey!
Adding to the challenge, the chef’s are required to swim and catch their own Conch and cook on a sandy beach with only firewood and minimal supplies.  Fresh fish and vegetables are made available to the chef’s.

It was rather comical watching these four chef’s snorkeling and attempting to secure these Conch that were laying on the bottom of the ocean floor.  They all seemed to agree that they would need at least ten each, walking out of the ocean dripping wet and sandy, they all begin to cook on their open wood fire grills.
While cooking, Richard feels the need to call out to his fellow chef’s that he loves them, they all return the sentiment and then back to cooking.
The chef’s are preparing lunch for a about a dozen guests in celebration of the 80’s anniversary of the Nassau Yacht Club.  Luckily Padma didn’t dine in her bikini, all guests were dressed in white.

Three and a half hours of fishing and cooking time later, the judges and yacht club members sit down to eat.  The chef’s were all concerned about sand getting into their food but apparently did a great job of avoiding that as Head Judge, Tom Colicchio announced no sand was found in any of the dishes.

Mike Isabella prepared Grouper with pineapple and a warm Conch vinaigrette, apparently his foresight to practice cooking with Conch was a smart move because it won him this challenge.

Antonia prepared a seared Snapper that all agreed was very spicy, that pleased many of the guests who enjoy spicy foods but the judges seemed to think it was a bit too much for most people.  Her fish was inconsistently cooked, some was over cooked and other pieces were undercooked.
Richard, like a fish out of water without his gizmos and liquid nitrogen, complained of leg, back and arm pain.  A unique dish using Sweet Potato’s and somehow making them look, feel and taste like pasta kept Richard in the competition.  Probably the best remaining chef, Richard wasn’t portrayed on this episode as a cocky, over-confident thug as he had been in the past.  Possibly producers eased up on airing his nasty comments in an attempt to make him more likable. 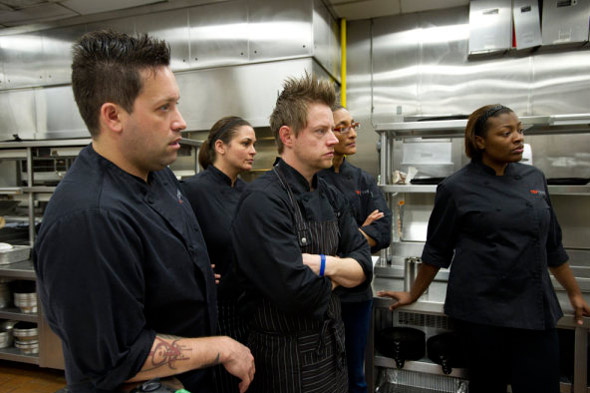 Tiffany’s dish didn’t make the cut, while it was described as a “nice dish”, Chef Tom didn’t like the flavor profiles and she was sent to pack her knives and go….
In a season that promised judges like Anthony Bourdain and Eric Ripert, we’re not seeing either chef on a consistent basis, they were both sorely missed on this episode.

Another “Final” next week, maybe this will be the real final?  I don’t know why the people at Top Chef think that moving the contestants from one location to another qualifies as “Finals”, but I think we’re finally there.  Don’t forget to vote for Fan Favorite on Bravotv.com.  ( Tre, Tre, Tre!)  Voting closes on March 24, one week from today and the winner will be announced on Watch What Happens Live on March 30th.  (you can vote up to 80 times..yikes!)  If Tre wins, I’m taking full credit for his win…know that!
http://bravotv.com/live-vote/top-chef/fan-favorite

Yesterday I received a Direct Message on Twitter from Rich Amons of The Real Housewives of DC.  Husband of Mary Amons, Rich asked if I knew about Mary’s trip to Chicago today.  I had heard that she was coming to Chicago but for some reason I thought it was sometime in April.  Rich was kind enough to send me the invitation via email and while I didn’t know it was a private event by invitation only, I included the information in yesterday’s blog and on Twitter.

Since my only big plans for last night was to watch Top Chef and cook dinner for my family, I decided both could wait and recruited a friend to join me at the high-end, upscale shopping venue, 900 N Michigan Avenue, Chicago where Mary would be appearing.
Unseasonably beautiful weather in Chicago, Mary spent just the one day here to promote her Labels For Love charity.  She explained at the intimate cocktail party that she had purchased a beautiful silver necklace several years ago while on vacation and wore it on the show The Real Housewives of DC.  Mary told us that so many people had asked her about the necklace and where they could purchase one of their own, so she contacted the retail store but found out that the piece had been discontinued and the mold had been destroyed. 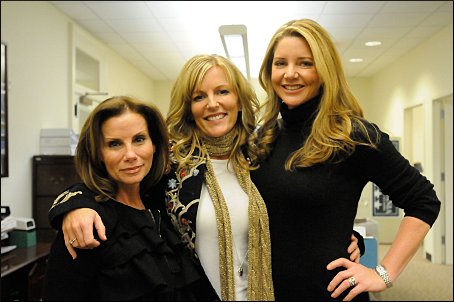 Mary explained to Christolf’s jewelers that many viewers of her show are interested in purchasing the necklace and had a brilliant idea.  Maybe she could work with the Jewelry store to create and sell the necklace in conjunction with her Charity, Labels For Love.  Christolf’s agreed and the rest, as they say, is history.
Mary’s Labels For Love is currently working with The Cancer Schmancer Foundation and their spokesperson, Fran Drescher who are dedicated to early detection and treatment of Cancer in women.

Mary was so sweet and it was a lovely evening, (capped off with a side trip to Bloomingdale’s) and I was able to help the cause with a purchase of the beautiful necklace.
Thank you to KookADoodleDo for this post:
KookADoodleDo says:
March 17, 2011 at 8:23 am (Edit)

Love the necklace Lynn!
Lucky You to be able to meet up with Mary again.
I just found the link to purchase if anyone is interested:
https://www.christofle.com/us/32-chokers-and-pendants/35092-labels-for-love-cross-pendant