The Real Housewives of New Jersey

Jacqueline finally posted her blog the other day, just a few days late Jac!  I believe that the reason it is so late it because it is so gosh darn long…Six long pages later, Jac really could have boiled it down to this:

Kim G acted like an ass, Caroline told her off, Caroline’s family had her back.  Christopher remains friends with Kim’s son and Jac would still say Hi to Kim G if she saw her on the street.

The Laurita Christmas is traditional and similar to many others across the country.  They enjoy going to Caroline’s for Christmas Eve but some family members weren’t comfortable with the camera’s and decided against going to the Manzo’s while filming.

Ashley decided that she didn’t want to spell her name the way her mother and father gave it to her and now spells her name Ashlee, Jacqueline continues to spell it Ashley.  Jac is clearly disgusted by her daughter’s constant digs and jabs at Jacqueline and Chris, but without bashing her own child, she simply hopes Ashley can see the truth someday.  Chris is a great step-fater.

Six pages down to three paragraphs,I saved you all a whole lot of time.  No, don’t thank me Jac, it was my pleasure 🙂

Teresa’s blog just annoys me, she writes like she’s so much better than anyone else on the cast because she’s not going to bash anyone yet she goes on to use underhanded ways to jab at them anyway. 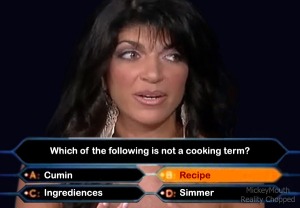 Teresa says that her husband remained silent while Melissa’s sister’s bump and grind on the dance floor.  WHAT?  This is Teresa’s way of telling viewers that the girls were dancing in what she feels is a raunchy way yet not coming right out and saying it.  I take back my original thought that someone else writes Teresa’s blog for her.  No one else is that stupid.

Some not so bright fan Tweeted to Teresa that she should be on Dancing With The Stars next season, apparently assuming that it is Teresa’s decision in the first place.  Teresa responded:

@Teresa_Guidice:  Would ♥ to but they don’t want Housewives this season. But Playmates are OK?

I don’t think they’ll want Housewives any season, I think the height of the Housewife popluarity may have came and gone.  If they were ever going to put Teresa on Housewives, it would probably have been last season.  There is no more popular or famous Housewife than

Bethenny Frankel and even she didn’t warrant an invitation on Dancing with the Stars, she got the next best thing that unfortunately flopped.  The best part of Skating with the Stars was the feud between Bethenny and judge weiny extradonarie Johnny Wier.

Keep dreaming Giudice, no matter how you pronounce your last name this year, or next year DWTS doesn’t want you!

The Manzo boys have a new venture, BLK Water which is water infused with folic acid that is apparently good for you.  The claim/sales tactic is that it helps you get over a hangover.  Interesting idea, would you buy Manzo water? 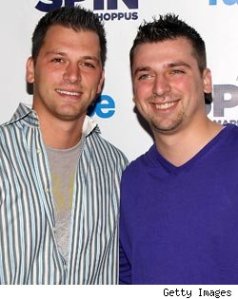 I will give the Manzo boys credit for sticking up for their mother Caroline.  Caroline infused herself (yes infused) into a conversation that turned into an argument with Kim G.  Caroline was right that Kim brought Monica to the party to start trouble but it wasn’t Caroline’s trouble and it wasn’t Caroline’s house.  As if that matters!  Caroline gave it to Kim G but good and when it

looked as though it may get physical, Chris, Albie and Al Senior all jumped in front of Caroline.  That is the kind of family you can admire.  The Manzo’s don’t typically jump into drama so I think it was genuinely done for their mother.

A preview of Sunday’s Christmas day at the Giudice house:

As Teresa explains that she tries to teach her four daughters that Christmas isn’t about material things, her girls are opening up expensive gifts and her lazy lump husband could barely get out of bed to be there, when he does he just takes a new place on the couch laying there like a lump on a rock.  Joe Giudice is really disgusting.

Enjoy your weekend the New Jersey girls will air on Sunday night with a new Watch What Happens Live to follow.  Immediately after WWHL, don’t miss Carly and I recapping the episode on blogtalk radio!  Here is the link to Carly’s site, you can also listen to past shows here:

Notice how Jill Tweets in hopes of letting people know what she’s doing and what D-list celebrity she is sucking up to?

I love this, now Andy has to tweet to let people know that he’s with Bethenny!

@BravoAndy I think @Bethenny and I were the loudest people in the Palm tonight. And THAT is saying something… 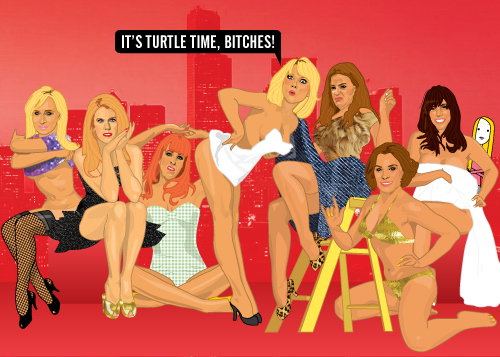 The New York ladies will be back with part two of the reunion show on Monday night.  I would imagine anyone watching this show would be concerned for the mental health of Kelly Bensimon. I honestly don’t know where Andy Cohen comes up with calling Bensimon “The voice of reason”    Kelly was a mean girl who treated Alex as if she was a child who was misbehaving, just as Alex pointed out Kelly doesn’t even know Ales but just listens to her boss Jill Zarin and does as she’s told.

Jill continues to whisper in Bensimon’s ear telling her what to say, she can’t help herself.  Even after viewers criticized Jill last season for telling Kells what to say, she did it again.  I don’t know why Jill just doesn’t say it herself, she has no problem inturrupting anyone else, why not just say what you want Kelly to say Ms. Zarin?

Next week will bring more arguments and more vile behavior.

RICH AMONS ASSHAT OF THE WEEK

Asshat of the Week!

Asshat of the Week!    This was a tough week to make a decision, there’s the stupidity that IS Kim G of New Jersey. Joe Giudice and his assinine comments to his daughter and about his wife’s family.Andy Cohen’s unprofessional, icy welcome to Alex McCord at the Real Housewives of New York Reunion.There’s no way any of those could hold a candle to the asshat’s that call themselves, “The Brunette’s”   Kelly Bensimon, Jill Zarin, Luann deLesseps and Cindy Barshop are this week’s asshats for their vile behavior on The Reunion Part I.

The Three Stooges plus one

Do you agree with this week’s Asshat?  If I had to pick only one it would have to be Jill Zarin, no surprise there, right?  Here’s why…

I have to give Luann a pass, although she was horrible and told Alex to “be quiet YOU, and stay out of it”, while she sticks her nose into everything (as do all the Brunettes) but Luann did defend Sonja against both Cindy and Kelly so Jill beat Luann without a doubt!

Cindy isn’t important enough to warrant an Asshat all on her own and Kelly is too stupid to have come up with these insults she lobbed at the Blonde’s on her own.  Jill wins!

Jill seemed to try to fly under the radar this season, she pretended to apologize and make peace with Alex McCord but we all know that was acting for the cameras and viewers.  Jill

didn’t fool anyone, she was just as awful this season as she was last season.  Last season we made a list of Jill’s bad behavior and I think it’s time to update that list since we have a whole fourth season as well as her off camera behavior.

We need an updated list so please add your own comments that include Jill Zarin’s bad behavior.

According to the schedule Jill and Ramona will appear on The Today Show on Monday, I think it would be fantastic if the two ladies were asked about their opposing views about our little blog here, wouldn’t it?   Since Jill has done everything to try to shut us down and Ramona has been so supportive including a link in her newsletter, wouldn’t it be nice if they were to talk about it on the Today Show? 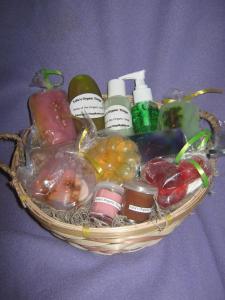 so many other products that I know you’ll love!  Cute shapes and all colors of the rainbow make it fun for kids to use while healing their irritated skin.  My son uses the little race car shaped soaps for his many mosquito bites that he gets while out playing sports.  He loves them!  Shapes for baby showers and wedding showers, birthday parties and more!

Sign up to win a free gift basket and mention the IHJZ blog to get free shipping on orders of $50 or more!

Finally I wanted to concede that Ms. Cat Ommanney will not be joining the cast of The Real

Housewives of New York, she has tweeted that she’s giving up that desire.  Whether Bravo told her that it wasn’t happening or she’s changed her mind about working with “toxic” women, I certainly hope that my favorite DC Housewife lands on Bravo or some other network in another capacity because I really miss seeing her on TV!  Love you Cat!